She is a Diamond - Musical Theater Club Preformace 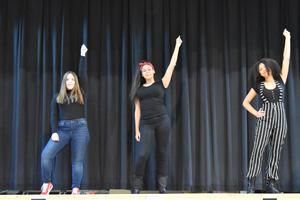 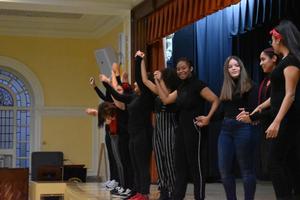 On Friday I had the privilege of watching the Musical Theater Club’s performance She is a Diamond that celebrated strong women through stories and song. The performance was beautifully produced by the City Center of New York. The musical put on by my peers was an excellent performance that empowered our youth and gave truth to the voice of women. It was a great opportunity for the girls to show off their talents in the arts, specifically in singing and dancing. I also found it to a way of joining the grades, from freshmen to seniors, that was inclusive and a special way for everyone to bond in their shared talents. Delving into the musical more personally, my favorite part had to be the original spoken word poem by Lara Dominguez ‘21 and Caitlyn Santiago ‘21 about mothers and daughters. The poem was beautifully written in a way that sparked so much emotion into the audience. I myself have taken spoken word poetry classes and seen my fair share of them, yet their performance was something I had never seen before. I enjoyed the way they embodied their poem which is something critical when it comes to spoken word performances whose purpose is to turn your writing into a physical body. They worked with actions and gestures that correlated with their poem to bring it to life beautifully.

All in all, this performance was an outstanding showcase of talent and I would recommend it to anyone who would be interested in an inspirational act.  - Sabrina Martinez