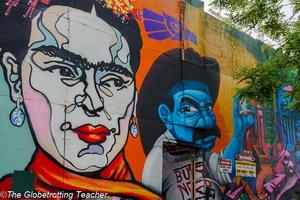 In the February issue of The Jeanite Tribune, we sent out a survey asking for Jeanites' opinions on the existence of and controversy surrounding graffiti and its perception as a criminal act or form of artistic expression.
by Lara Dominguez

In the February issue of The Jeanite Tribune, we sent out a survey asking for Jeanites' opinions on the existence of and controversy surrounding graffiti and its perception as a criminal act or form of artistic expression. Jeanites are an interesting population to survey with these questions due to their diversity and status as residents (or at least students) of New York City, a major hub for graffiti history and street art movements where graffiti is unavoidable in everyday life.
Opinions of graffiti are generally positive, with 27% of those surveyed saying they like graffiti and do not in any way view it as a criminal offense and 67% saying they have mixed opinions but do not feel that graffiti artists should be punished as criminals. Only a total of 4% of those surveyed state that graffiti in any or all forms should be punishable by legal action.
A total of 90% of those surveyed believe that street art is its own valuable art form; however, 32% believe that continuation of street art by criminal action should be prevented, perhaps contradicting the results of the prior question.
Of those surveyed, 67% believe that punishment for vandalism should vary based on the artistic or cultural merit of the graffiti, and 94% believe that certain pieces of street art should be protected by the government, rather than condemned or covered.
Because judging the merit of art is such an opinion-based and nuanced topic, the open response question displays the most interesting variation of opinions. One student states that the important determining factor in the value of street art is intent, rather than artistic merit, stating that graffiti produced with the sole purpose of defacing property should been seen as a criminal offense. Many Jeanites state that, despite their opinions on the concept of street art, they believe graffiti associated with gang activity should be removed, and several Jeanites offered specific cases wherein graffiti would be perfectly acceptable, such as if it were commissioned to memorialize a specific community member. One Jeanite even proposed a system through which street artists could ask community representatives for permits to make street art in public areas such as parks.
The vast majority of open response answers were positive, explaining the artistic importance of graffiti as a form of self expression for artists who feel street art is a way to make the biggest impact without the restrictions of the typical art world. Street artists may chose graffiti as their medium for reasons such as wanting to reach a bigger audience, wanting to connect with a specific community where art may not be wholly accessible, not having access themselves to more traditional forms of spreading their art, or wanting to make a sort of lasting memorial or piece for a specific community. In addition, many Jeanites expressed their personal ties to graffiti as a part of New York City and its culture. One Jeanite says:
"I feel as long as it isn't anything disturbing, disrespectful, or actual vandalism of a sign or official property, then let it continue. It has for years, it's what brings color to the gloomy dark areas of New York. Taking that away takes away the creativity and liveliness that we are taught to bring out growing up."
Some Jeanites expressed that graffiti is associated with their personal perception of New York, rather than the surface level perception of New York seen by outsiders. This is emphasized in street art's ties to the outer boroughs and to the subjugated and poorer communities of New York.
Although mixed, the results of our survey generally prove that, as New Yorkers, Jeanites feel a positive cultural connection to street art and believe that it should be preserved and maintained.