Alumnae » Alumnae In the News

Alumnae In the News

Hymns, Teach-ins and a Horse Ride to School:
Catholic Stories of the First Earth Day 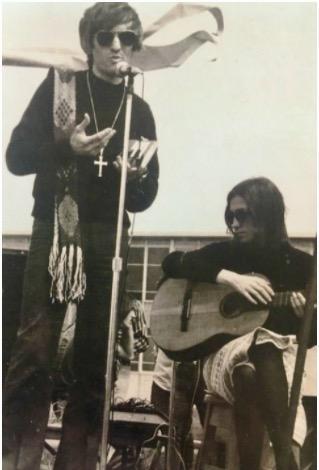 April 21, 2020
by Brian Roewe
Reprinted by permission of National Catholic Reporter www.NCROnline.org.
Photos courtesy of Sr. Kathleen Deignan and Sacred Heart University.
It was a cloudy day.
There was a chill in the air that Wednesday in spring on the campus of Sacred Heart University, in Fairfield, Connecticut. In an open green space, members of the campus ministry team set up a stage for a daylong festival. Students with long hair danced in the field. Others sang and played music on stage. A priest led prayers as part of a liturgy for the natural world. There was food, banners and balloons.
The date was April 22, 1970.
The first Earth Day.
"It was a great day. It was full of vitality and song," said Notre Dame Sr. Kathleen Deignan.
The thousands of celebrations, demonstrations and teach-ins that took place across the American map that day 50 years ago are largely credited with the birth of the modern environmental movement. Those first seeds of ecological concern were planted in national upheaval as the protests against the Vietnam War reached a fevered pitch, the civil rights movement rolled into a third decade, and the nation worried about the buildup of nuclear arms amid the Cold War. The crew of the ill-fated Apollo 13 space mission had just returned to Earth. Within the Catholic Church, the documents of the Second Vatican Council were beginning to take root.
The idea for the first Earth Day is largely credited to Sen. Gaylord Nelson of Wisconsin, who sought to fuse the energy of the student anti-war movement with heightening concern about polluted water and skies. A major oil spill a year earlier off the coast of Southern California, along with Rachel Carson's seminal text Silent Spring published nearly a decade earlier, remained fresh in the minds of many.
Within three years, the U.S. Environmental Protection Agency was established, and Congress passed the Clean Air Act, Clean Water Act and Endangered Species Act — all signed into law by President Richard Nixon, who by 1974 would resign the office facing impeachment over the Watergate investigation. Many viewed Nixon's action on the environment as an attempt to placate the masses of students opposing the conflict in Vietnam.
An estimated 20 million Americans took part in that first Earth Day, representing at the time one-tenth of the U.S. population. Scattered among them were many Catholics and people of faith. The staff coordinating Earth Day encouraged local organizers to reach out to the faith community, well aware of the "huge role" they played in launching the civil rights and anti-war movements, recalled Denis Hayes, who was in 1970 the 25-year-old Harvard graduate student Nelson appointed as national organizer.
"I'm confident lots of priests gave Earth Day talks," he said.
In San Francisco, 25 U.S. bishops gathered for their semiannual assembly, concelebrated a Mass for Earth Day, "petitioning that the earth's resources would be used properly," according to a Catholic News Service report from the time.
Prayer services, teach-ins and demonstrations took place on some of the nation's most well-known Catholic campuses, as well as in school buildings in small towns situated among ranchlands and coasts.
These are some of their stories. 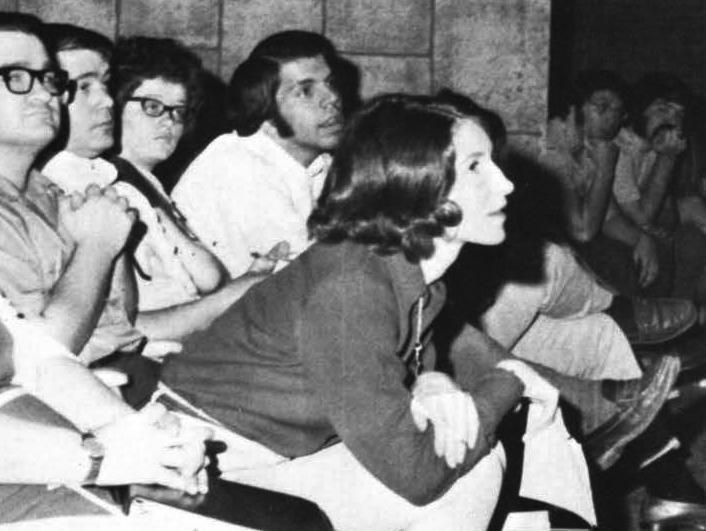 At Sacred Heart, the overcast skies weren't enough to blot out the excitement beaming from Deignan. A student and newly professed sister with the Congregation of Notre Dame, she was among the cohort of peer ministers on the campus ministry team, led by Fr. John Giuliani, that planned the open field prayer service that accompanied teach-ins happening elsewhere on campus.
"We wanted to bless it in our own way, in our liturgical way," said Deignan, now 50 years later, the leader and namesake of the Institute for Earth and Spirit at Iona College in New Rochelle, New York.
The convergence of the energy of Vietnam protests and the spirit of Vatican II made for complex but creative times at the Connecticut school. Students joined the nationwide moratorium demonstrations calling for an end to the war. The campus ministry team was exploring new music and new liturgy.
"We were kind of riding these winds, these winds from different directions that were blowing throughout the culture and the world," Deignan said, calling it a time "when students were trying to figure out how do we live now."
The Earth Day service was meant to both celebrate creation while also awakening to the crisis facing the environment. With climate change not yet in the vernacular, concerns focused on acid rain, pesticides, polluted water and streams, and the destruction of the atmosphere and ozone layer.
Giuliani, who would later go on to found the Benedictine Grange community, preached from the stage. Drawing on the writings of the late Jesuit Fr. Teilhard de Chardin, whose work was coming into prominence, and Trappist Fr. Thomas Merton, who had died two years earlier, Giuliani delivered an impassioned sermon about the sacredness of the Earth and how all atomic particles in the universe flow from a divine source.
Deignan took to the stage, too. The future composer performed music in a setting just a two-hour drive from the site where Woodstock had played out eight months earlier.
"We looked like hippies, by the way. But that was the way it was in those days. Everybody has long hair and I wore a long skirt," she said, the sister quick to note she did not attend Woodstock.
The news of a nationwide day dedicated to celebrating the Earth left Deignan feeling "really happy, and in a sense, exhilarated."
A self-described urban child of Irish immigrant parents, she said her awakening to the environmental crisis came at St. Jean Baptiste High School in New York City. One day during the lunch period, she was dancing with friends when Mother St. Bertrand called her over and handed her a book, saying "I know this is going to be an important book for you."
It was Silent Spring. The gift from the biology teacher confounded Deignan, who preferred literature and history over science.
"Ever since that day, my life changed," she said. "And the direction of my life changed, and it was clear that this little urbanite was going to ... I mean, we all thought we were going to save the world in the 1960s and '70s, but my part of the world that I would save was the natural world."
As she entered into teaching herself, the Notre Dame sister continued to celebrate Earth Day. One year, she and her class painted a mural. More recently, she has joined her students at Iona in climate marches and protests. Along with founding the Institute for Earth and Spirit, she formed the Thomas Berry Forum for Ecological Dialogue and teaches courses on religion and the natural world.
"That first Earth Day was a seed that I've nourished, for sure."
Click here to continue reading the story at NCROnline.
Kathleen Deignan is the founder of The Sister Kathleen Deignan, CND Institute for Earth and Spirit at Iona College.
Click here to read more about her work.